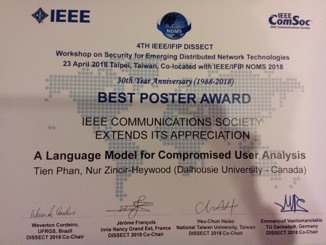 Congratulations to Tien and Nur for receiving the Best Poster Award at the IEEE/IFIP Workshop on Security for Emerging Distributed Network Technologies (DISSECT) co-located with IEEE/IFIP NOMS 2018.

NIMS Data Sets
NetMate is employed to generate flows and compute feature values on the above data sets. Data sets are available for researchers in ARFF/CSV format which are ready to be used with Weka.

SBB
SBB is a form of genetic programming based learning algorithm which is designed and developed to solve tasks using a co-evolutionary approach.

Tcpreplay
Tcpreplay is a suite of BSD GPLv3 licensed tools written by Aaron Turner for UNIX (and Win32 under Cygwin) operating systems which gives you the ability to use previously captured traffic to test a variety of network devices.

NetMate
We use NetMate at NIMS to convert capture files of network traffic into flow statistics. NetMate lets you generate a comma separated value file containing flows from a capture file.

Tranalyzer
Tranalyzer2 is a lightweight flow generator and packet analyzer application designed for researchers with an emphasis on simplicity, performance, and scalability.

Circos
Circos is a software package for visualizing data and information. It visualizes data in a circular layout – this makes Circos ideal for exploring relationships between objects or positions.

Weka
Weka is a collection of machine learning algorithms for data mining tasks. The algorithms can either be applied directly to a dataset or called from your own Java code.